One of the reasons Ashley moved to New York City was for Central Park. She had always dreamed of running through the scenic park, passing the Boathouse, Tavern on the Green and all the famous sites with her dog Ella. When she moved here, however, life got busy! She found herself making excuses (especially in the winter) about why she couldn’t take Ella on a long walk. She found herself saying, “it’s cold out” or “I’m exhausted,” more often than she would like to admit.

Unbeknownst to her, however, Ella was gaining weight in her new environment. She had put on almost 25 pounds. As a first-time dog mom, Ashley didn’t know what was considered a healthy weight for a dog of Ella’s breed and age. The weight gain was progressive, and she thought that maybe it was because Ella was entering into her “senior” years and that it was probably normal.

Fortunately, LINK AKC came into their life when Ashley became a member of the Product team here at Link AKC. For the first time, Ashley had true insight into Ella’s daily movements. Ashley started noticing patterns and saw that Ella was not reaching her activity goals. She soon realized that Ella wasn’t lazy, it was actually that she wasn’t getting enough walks. Ashley now looks back and says that the LINK AKC collar came at the perfect time. It helped keep her accountable, and , Ella began losing weight. Not only is Ella now down to the correct weight for her age and breed, she is healthier, has more energy and even acts like a puppy! Her quality of life in her senior years has been greatly improved. 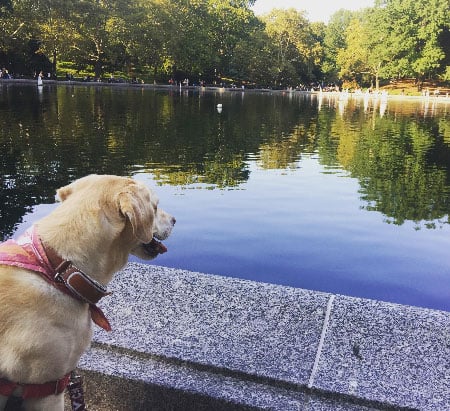 Ashley relies greatly on the activity feature on Ella’s LINK AKC collar that has a customized goal determines based on her breed as well as age. Ashley loves checking in on the activity feature during her walks in the park, as well as when she is away from Ella. Similar to a lot of New York City dog owners, Ashley hired a dog walker to take Ella out during the day while she is at work. This is where LINK AKC’s GPS feature has proved very useful.When they moved to New York City Ashley tried out a few different dog walkers until she found the right one. She tracked their walks from her smartphone to make sure Ella was going out at the right time and taking the long walks that she deserved. While using this feature, Ashley discovered that one of her dog walkers was only taking Ella out for less than 5 minutes!

Ashley describes the LINK AKC collar as being a fun way to interact with Ella other than just giving her treats. It’s so easy to praise your dog with snacks, but taking them for a nice dog walk is rewarding for them and for you. Ashley loves using the Adventure feature on the weekends when they go to explore Central Park. The maps show all the places that they have gone together and save photos and videos from Adventures in a digital scrapbook. It’s a fun way for her to look back on how they have explored New York City together through all four seasons!

Another feature that Ashley loves about the LINK AKC collar is the LED Light. No matter where you live, everyone has to take their dogs out in the dark. Ashley says, “I love the light because it’s easy to use (literally just tap a button on the app and the LINK light comes on) and because we are more visible at night it keeps us both safe.”

When Ashley looks back on all of the experiences that she has shared with Ella, she proudly states, “I love Ella so much, she’s my best friend and I can’t imagine life without her.” They’ve lived in three cities and two states during their six-year adventure together. 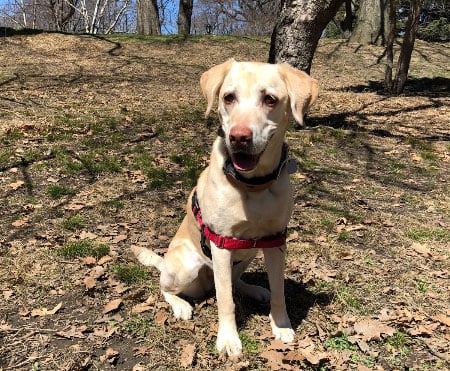 According to her vet, keeping your dog at a healthy weight can help them live a year or two longer. Ella is almost 8 years old, and as a devoted pet parent, Ashley is willing to do whatever she can to keep her healthy. Being held accountable by LINK AKC’s activity monitor, and all of the other great features, she is able to push herself and Ella to be healthier and happier.

The Link smart collar is now available for reservation at linkmypet.com.

Why should human wrists have all the fun? The all-new Link Smart Collar was designed to help...

Dog mom Kate Upton and her BFF Harley are practically connected at the hip. With Kate's busy schedule though, sometimes it's hard for them to stay literally...