Air Force Dog Handler Ethan took a different path to becoming a dog handler than many others. He began his military career as a regular Security Force member, but his dream was always to become a K9 handler. He learned at a young age that working on a team with a K9 can be a rewarding yet unpredictable job. He first learned about K9 teams when he was a teenager and his stepfather became a police officer. On September 28, 2006 his stepfather’s job forever changed the trajectory of Ethan’s future career choices. Polk County Sheriff’s Office Dog Handler, Deputy Matthew Williams and K9 DiOGi, colleagues of his stepfather, were tragically killed on the job. Their stories of courage and perseverance inspired Ethan that one day he too would become a dog handler in order to protect and serve his country.

In 2012, Ethan joined the Air Force and chose Security Forces to begin a career in Law Enforcement. Working with K9s was still in the back of his mind. At his first Base in 2012 he began decoying for his supervisor’s Belgian Malinois, Eespn. Decoying involves pretending to be a perpetrator to agitate a dog in a controlled environment to test their skills. This includes wearing a protective padded bodysuit, wrap, sleeve,and being bit by the dog. The certification to work with dogs, commonly known as “Wrap Certified” in the Air Force, is not the same as being a certified dog handler. Decoys are wrap certified and work directly with K9 handlers and their dogs. Decoying trains dogs to follow certain commands and to test any shortcomings or weakness they may have. The constant rigor of being trained and working through any issues gives the dog the confidence it needs for when they’re working in the field. Ethan’s work with Eespn was his first time working with a dog in the military. Eespn was not only training at Lackland, but was part of their breeding program and born on site. He had previously deployed twice to Afghanistan and was the perfect dog for Ethan to work with.

Ethan told us that he was one of the only “Straight Leg” or regular Security Force members that was Wrap Certified to work with dogs as a decoy. The Air Force requires at least 2 years as a regular Security Forces member before getting certified as a K9 handler. After 2 years, he was excited to begin training with K9s, however, his wife had just started nursing school and he was concerned that if he received his K9 certification, there was a big chance he would have to transfer to another base and his wife would have to start again at a new school. He decided to put his K9 handler training on hold. For the next two years, he volunteered at the kennels on the base doing everything from cleaning, catching dogs, to assisting wherever he was needed until 2016 when he was deployed to Qatar. While overseas he began learning more about dog training from a handler on the same base. They got together weekly to do bite work, demos for agencies around the base, and continued to assist out in the kennels.

When his deployment ended his mind was made up.  It was the right time for him to enter into K9 school. He applied and in November 2016 he began at Lackland for his DOD Basic Handler’s Course. He graduated in February 2017 and returned to Sheppard Air Force Base. When he got there he was assigned a familiar face to continue his training with, Eespn, his Belgian Malinois decoy buddy. In May 2017 he was transferred to Laughlin Air Force Base in Del Rio TX where he was officially paired with his own Military Working Dog, Toby, a five and a half year old, 80 pound German Shepherd Dog. Toby is a Dual Purpose in Detection and Patrol. Ethan is his second handler. Toby has been overseas to train in the past but has never been on active deployment. Ethan has been working with him so if that opportunity ever comes up, he will be great. In the meantime, they are honing their skills as a team and also train regularly with Border Patrol. 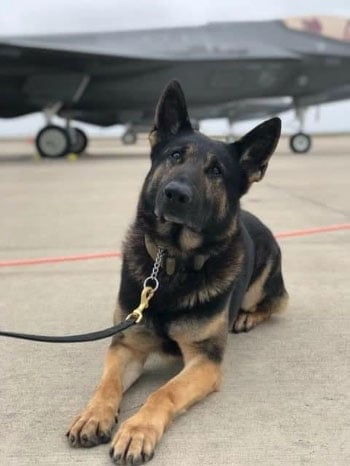 Ethan says the best part about working with dogs is that you never have a bad day. If you don’t learn something every day about yourself or your dog, then you are doing it all wrong. He states, “the dogs are always the hardest workers in the room and they never hold grudges.” This is a sentiment that remains consistent with each and every K9 handler that we have spoken to. Although the three K9 teams that we have written about are each from different branches of the military, Haney & Mirko in the Navy, Jordan & Bob in the Army and now Ethan, Eespn & Toby in the Air Force, one thing remains the same. It is that Military Working Dogs are assets to not only our country, but to the individuals that train and work with them. Each handler mentioned that even when they are having a difficult day, they find comfort and solace in their relationship with their dogs. Sounds familiar, doesn't it?

Veteran’s Day is a holiday that all Americans recognize, celebrating the end of World War I and honoring all veterans who have served our country during all wars....

For the past 75 years, working dogs have been officially serving alongside our servicemen and women. The stories of K9 handlers and their military working dogs are each...