For the past 75 years, working dogs have been officially serving alongside our servicemen and women. The stories of K9 handlers and their military working dogs are each unique. Behind each story is a team of human and dog who rely on each other in the best and worst of times. Learning about how these servicemen and women join the military and ultimately choose to work with animals, is nothing short of inspiring. The process to become a dog handler in the military is not easy, but is a rewarding one.

Growing up, Jordan dreamt of becoming a police officer and loved the idea of working with a K9 unit. He comes from a large military family and joined his local ROTC program during high school, which ultimately led him to decide on a career with the Army. While searching for the right path he discovered the “31K Unit,” a unit for Military Police Working Dog Handlers. Given his childhood passion of becoming a K9 police officer, this was the perfect job for him.

Becoming a Military Dog Handler is not easy. The military considers this to be an honor and not all who apply end up getting selected and not all successful applicants end up completing the rigorous training program. The training program itself consists of 17 weeks of Advanced Individual Training. A handler must pass a Skill Test, and only then are they able to be certified as a Military Dog Handler. Jordan’s journey to becoming a Working Dog Handler began at Fort Leonard Wood Missouri. The first 8 weeks of the program were spent in basic training learning to become a Military Police Officer. He was then transferred to Lackland Air Force Base in San Antonio where he spent 11 weeks learning how to be a Dog Handler. He started by learning the basic handler tasks such as combat life saving skills, dog psychology, basic obedience, and patrol work. Patrol work includes controlled aggression, scouting, and building searches.

After graduating training, Jordan was stationed at Fort Stewart Georgia where he teamed up with Bob, his Military Working Dog, to complete the final stage of his training and get officially certified. Bob is a PEDD (Patrol Explosive Detector Dog). The time when a handler gets to meet their first Military Working Dog is a special moment. The dog they are assigned to partner with will become a huge part of their life. When Jordan and Bob were first paired, Jordan was a little hesitant since there was another dog in the program that he had been hoping to work with. However, they soon created a special bond and quickly excelled in their tasks as a team. Passing the final certification exam is a grueling week-long test that involves everything from basic obedience, patrol work, and 5 days of explosive detection. After three months of training, Jordan passed the Army’s MWD certification with flying colors.

Jordan and Bob spent almost 9 months working together at Fort Stewart when the news came that they were going to be deployed overseas together. They went to Yuma Arizona to complete a month-long USMC MWD pre-deployment training; a program designed to emulate any possible combat scenarios they could encounter during deployment.

The skills that these teams train and master are based on real life scenarios. While the technical skills are of great importance, so is the bond that the handler and the dog create with one another. They must learn to trust each other completely. They have to learn about each other’s personalities, to communicate and play off each other’s strengths and weaknesses. It is a relationship that most of us cannot even begin to imagine. The two rely on each other for comfort, safety, and companionship. These dogs are highly skilled, and while they offer a great sense of normalcy and solace for many handlers, their ultimate job is to serve and protect them.

Soon after Jordan and Bob were deployed they began utilizing their skills in a war-zone. Spending so much time together strengthened their bond further. Jordan remembers that when they were first paired together, Bob was a very reserved dog that did not enjoy cuddling. Being with Jordan in such an unpredictable environment, Bob has become a very loving and cuddly dog. During deployment there have been times when Jordan has needed to travel to other locations and wasn’t able to bring Bob with him. His teammates told him that Bob would get visibly upset, missing Jordan and looking out from his kennel towards Jordan’s door waiting for him to return.

The amount of time that a handler and dog spend together depends on a number of factors. Once a deployment ends, a handler must wait to see if they are given orders to relocate to a new duty station. If that is the case, the handler is unable to bring their dog with them. The dog waits at the post for another handler to arrive. This is one of the hardest times for a handler, as saying goodbye is no easy task to a dog that has been by their side through unimaginable events. For Jordan, “The idea of leaving him is almost unimaginable, and I do not look forward to it. But, it is something that I will have to live with. He will always have a place in my heart, and hopefully he always remembers the great times we have had, the times he has comforted me in a foreign and dangerous place, the times he has protected me from explosive devices, and the times I have spent loving him at night.” 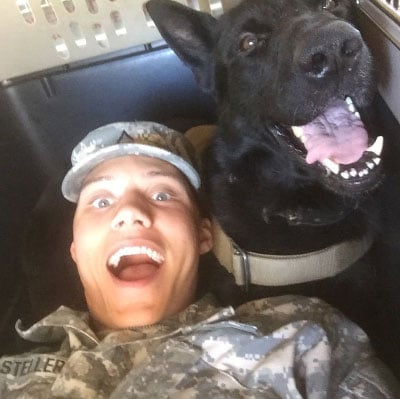 This is not to say that Jordan and Bob will never see each other again. Bob is almost 8 years old and may be retiring from the military soon. Jordan hopes to adopt Bob after he retires and wants to give him a long happy life as a couch dog. Recently the US Army has acknowledged that they mishandled the adoptions of many retired Military Working Dogs. This has resulted in some handlers missing out on opportunities to adopt their former working dogs. From 2000 until 2015, the Department of Defense did not establish priority for handlers to adopt their former MWDs. However since then, Congress has recommended that they be first on the list to adopt their dogs. We hope Jordan and Bob are able to be reunited once Bob’s service ends.

Next week we will meet MA2 (AW) Haney and his Military Working Dog, Mirko. They have been a team together in the Middle East for a little over a year. We can’t wait to share their story with you!

On Veteran's Day we honor the service and sacrifice of those who have served their country. Often their sacrifice doesn't end when their enlisted service is over....

Veteran’s Day is a holiday that all Americans recognize, celebrating the end of World War I and honoring all veterans who have served our country during all wars....