Life hadn’t been easy on Christopher. After enduring depression, combat-related PTSD, and then losing his cat to cancer, Christopher arrived at the decision that it was the right time for another companion animal in his life. After all, it’s been said, “Our perfect companions never have fewer than four feet.”

As a combat veteran with a PTSD diagnosis, Christopher was eligible for a service dog, but the waitlist to receive a trained service dog from an organization was long. According to DAV.org, the use of emotional support animals and therapy animals has risen dramatically over the years and has provided an important benefit to many within the veteran community. A wide body of anecdotal evidence and scientific studies reflects what many already suspected—animal companionship can help support positive outcomes in physical and mental health.

Considering the long wait time and his desire to add a four-legged family member sooner rather than later, Christopher decided he would instead adopt a puppy and find a qualified trainer who could help train the puppy alongside him to suit his needs. This is where Gracie enters the story! 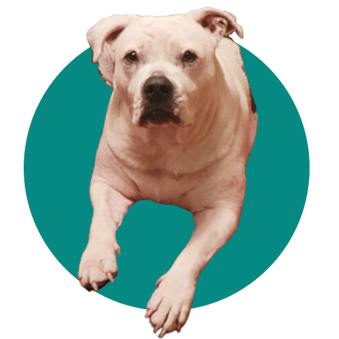 Christopher adopted Gracie when she was just 6 weeks old. All her siblings had been spoken for except Gracie, and the owner was going to drop her off at a nearby shelter. Christopher stepped in and gave Gracie the home she needed. They began working together on her service training right away, and Christopher notes that Gracie nailed her basic obedience training right away. After this, Gracie was trained to read Christopher's body language and understand when he may be experiencing a flashback, having a nightmare, or beginning to show signs of anger or upset. When she sees these signs, Gracie barks at Christopher, nuzzles into his body, or sometimes even lays on his chest. They are now inseparable, deeply bonded, and truly best friends.

In addition to spending her days navigating life side-by-side with Christopher, Gracie has become a bit of a celebrity! A Boston-area news team member spotted Gracie hanging out of the window waiting for her post-vet treat at McDonald's and aired the photo on TV. She's also been featured in an adult coloring book!

Christopher notes that Gracie is always by his side. He couldn't stand the thought of her ever being lost and scared, and he wanted to make sure she was safe all the time. Because of this concern, Christopher began looking for a pet GPS tracker. After conducting thorough research, he decided Link was the best solution for Gracie. Now they never leave home without Gracie sporting her Link!

If you’re a Link customer and find yourself in need of lost dog assistance, please don’t hesitate to reach out to our Link Concierge team. They’re prepared and ready to assist with GPS tracking updates and community outreach to help our Link users bring their pets home to safety.

Did you know 1 in 3 pets goes missing in their lifetime? Losing your four-legged family member is something we hope you never have to face. The best way to prevent...

When is it a Veterinary Emergency?

It’s 10 p.m. and you notice your dog has a bad limp. Or maybe he has suddenly developed a severe rash. Are these signs of an emergency that need an immediate trip to...