From George Washington's parrot to Calvin Coolidge’s Rebecca the raccoon, there is a long and curious history of animals in the White House. Unsurprisingly, dogs have made the most popular presidential companions. Here are just a few of the interesting and memorable pups who have held a place of honor with the commander in chief.

Laddie Boy was President Harding’s Airedale Terrier, known for his regular media coverage as “First Dog”. He had a seat at the table in cabinet meetings, had elaborate birthday parties, and together with the First Lady, promoted animal rights. When his master passed away in 1923, a statue of Laddie Boy was created from donated pennies in Harding’s honor. The statue now resides in the Smithsonian collection. 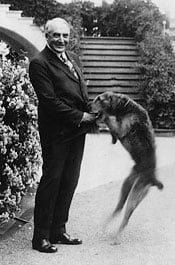 Fido was a yellow mixed breed dog who lived with Abraham Lincoln prior to taking office. He was a common sight following Lincoln around Springfield, Illinois, and had the run of the home, to the dislike of Lincoln’s wife Mary. According to Lincoln’s law partner, once elected, Mary considered Fido’s lack of decorum inappropriate of the White House, and Fido was left with a friend, along with his favorite sofa to sleep on and instructions for a pampered lifestyle.

When Lincoln was assassinated, Fido was brought out to meet mourners. Photos of Fido were circulated as mementos to mourners, and Fido’s story was picked up by newspapers, popularizing the name. Sadly Fido himself met an untimely death a year later when he was stabbed by a disoriented drunk person. This tragedy was styled by media as a second “assassination”. 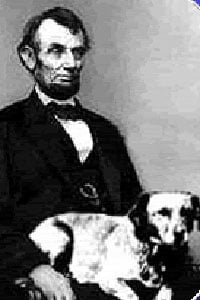 Rob Roy, named after the cocktail, was an all-white collie, and the favorite pet of Calvin Coolidge. He was a “stately” animal who accompanied Coolidge both to the Oval office and on fishing trips. Rob Roy posed with First Lady Grace Coolidge in her official portrait, which hangs in the White House today. He was one of the numerous other animals of the Coolidges – including eleven other dogs; a raccoon named Rebecca that the First Lady saved from being Thanksgiving dinner; multiple canaries and songbirds; and exotic animals including lions cubs Tax Reduction and Budget Bureau, a wallaby, antelope, black bear, and the pygmy hippo William Johnson Hippopotamus, Billy for short.

Murray the Outlaw of Falahill – “Fala” for short, was Franklin Delano Roosevelt’s Scottish Terrier and was also popular with the media. He traveled with the president in his private airplane, rail car and by ship, and met dignitaries including Prime Minister Winston Churchill. Fala was well liked by the media, appearing in a film, “The President’s Dog”, and a cartoon series by Alan Foster called, “Mr. Fala of the White House”. Fala’s true claim to fame, however, was the Fala speech, where Roosevelt responded to accusations that he had forgotten Fala on an island and retrieved him with a destroyer at the expense of taxpayers. Roosevelt took a stand against “libelous statements about [his] dog” and joked that Fala’s “Scotch soul was furious” and he “has not been the same dog since”. The speech was well received and bolstered FDR’s popularity in the 1944 presidential campaign. 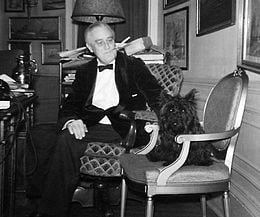 Pushinka, meaning “Fluffy”, was a gift from Nikita Khrushchev to the Kennedy family. Pushinka was the daughter of Strelka, a Soviet space dog who was one of the first to go to space and return safely aboard Korabl-Sputnik 2. Pushinka went on to have “pupniks” with fellow White House dog Charlie. 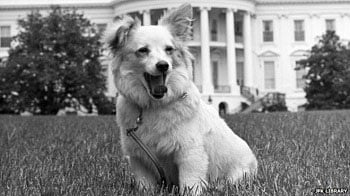 Yuki was a white terrier and Lyndon B. Johnson’s favorite pet. The pup was found in LBJ’s hometown by his daughter, and man and dog became close friends. Yuki slept with the president at night, attended meetings with him, and would “sing” with the president, as captured in a memorable photograph.

Rex was Ronald Reagan’s King Charles Spaniel and helped popularize the breed with his fame. He lived in the White House from 1985 to 1989, taking over the post of First Dog from Lucky, who outgrew the position and retired to the Reagan family ranch. Rex enjoyed elaborate dog houses – first a colonial-style house with framed pictures of his family, and in his later years a White House-shaped one. During his time at the Capitol, he refused to enter the Lincoln Bedroom, leading to speculation that it was haunted. 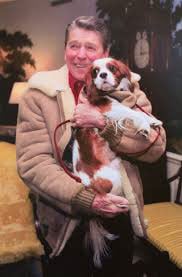 Millie, President George H.W. Bush's pup, was an English Springer Spaniel and is considered one of the most famous presidential pets. Millie was depicted in TV shows and has the distinction of being the author of “Millie’s Book,” which describes her life in the White House. Two of her puppies went on to become successors as First Dog, and today you can enjoy her legacy at Millie Bush Bark Park, a dog park in Houston. 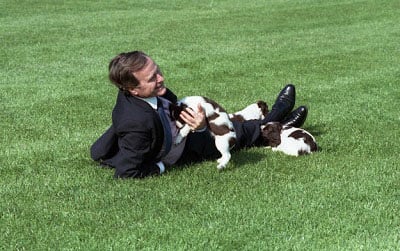 Barney was a Scottish Terrier belonging to George W. Bush who took the media savvy of First Dog to the next level as the first presidential pet with a website and as the star in eleven short “Barney Cam” films, including Christmas specials. Barney also enjoyed playing outside and hunting for fish and armadillo. 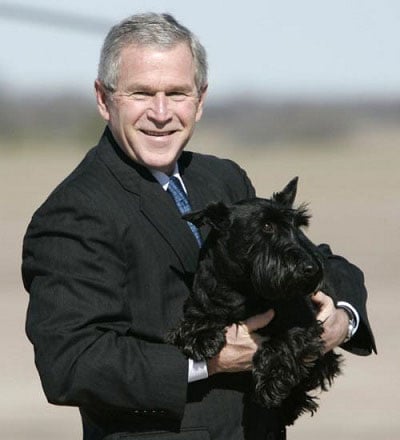 Bo and Sunny are the dogs of the Obama family. They are Portuguese Water Dogs, chosen for their hypoallergenic fur, and are known for their friendly personalities. Bo is the subject of four children’s books and has been featured in the media, including a parody of Barney Cam and in a Marvel comic.

You’ve probably envied your dog for his uncanny ability to fall asleep anywhere, anytime, in seemingly any position! Here are five dog sleeping positions and what...

You probably don't think much about how your dog poops, unless you're cleaning it up. But there are some fascinating things about his behavior when he does his...