When your canine BFF rests her head on her paws, you joke she looks deep in thought. But maybe she is. A neuroscientist at Emory University, Dr. Gregory Berns believes dogs do think and has devoted hours of research to dog thought processes. Dr. Berns began his research by wondering if his Pug, Newton, really loved him or if Newton just loved the food he supplied. Dr. Berns decided to find out by using MRI brain scanning.

The doctor's first challenge was teaching dogs to keep still during MRIs. He conquered this hurdle by training his initial test subject to learn the multiple baby steps required to be a model patient, steps like walking up stairs, holding her head correctly and lying still. After three months of training, Berns set up testing to see if dogs use their brains the same way humans do. He first tested canine brain response to delayed gratification. It turns out delayed gratification in dogs activates the prefrontal brain lobe, indicating dogs achieve certain tasks the same way people do.

Next, Dr. Berns ran brain scans on dogs when given food and then again when given praise. He found the reward centers of most dog brains react equally to praise and food, but in 20 percent of dogs, the reward centers reacted stronger to praise. This means your pooch probably loves you at least as much as he loves his chow. 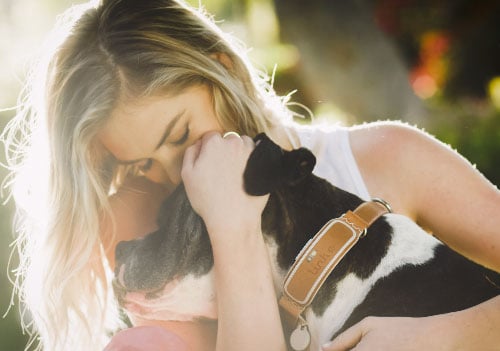 Berns thinks noninvasive approaches like MRI will eventually let us decode much of what happens in canine brains. "Because dogs can't speak," he says, "this may be the best and most accurate approach." Berns posits we'll know more about dog thoughts in the future as the research field develops. Until then, your best bet for knowing all you can about your pup is the LINK AKC Smart Collar, which can track your beloved buddy's location, activity and overall wellness.

If you'd like to learn more about Dr. Berns and his research, check out his recent book, What It's Like To Be a Dog.

4 Reasons Your Dog is Peeing in the House

Most dogs avoid urinating where they sleep and eat. But what does it mean when a pet you thought was perfectly housetrained starts urinating indoors? Depending on the...

7 Things We Are Into Right Now at Link

While we feel like the world is somehow on pause, it hasn't stopped us from shopping online. So we thought we would share some things we are into right now. Dog...
Link My Pet
Read More