We’ve all heard the hype around DNA testing for dogs, but what are the real benefits from purchasing one of these kits? Some people decide to test their dog out of pure curiosity. When adopting a dog, there is usually some level of guesswork that goes into identifying what breed mix they are. Unless the rescue group knows the mother and father of your dog, there is no way they can accurately tell what breeds she is made up of. Actually, even if the group does have an idea about the mother and father, the puppies in a litter can have different fathers from each other!

Many people choose to purchase a DNA test for their dog to see if their beloved pet carries any genetic markers for diseases. DNA tests look for for clinical traits that can help you better understand your dog’s predisposition to certain diseases.

If you read our Holiday Gift Guide, you will remember that Callie was given a DNA test for the holidays. When she was adopted, her parent’s were told that she was a Border Collie mix. In the 3 years since her adoption, she has been identified by people as many breeds such as Flat Coated Retriever because of her coat and marketing, spaniel because of her ears and collie because of her stature. The good news is, her results are finally in and we can’t wait to share them with you. 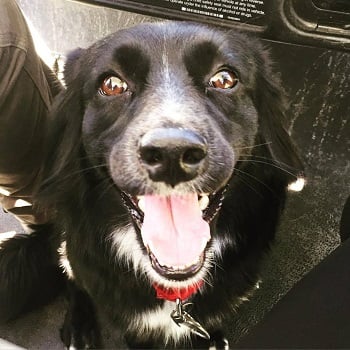 The first step of a DNA test is ordering the test online and receiving it in the mail. Once you have the small box in hand, the test is done by swabbing the inside of your dog’s cheek with the q-tip type device they provide and sending the sample through the mail (via their postmarked box). Once the sample is received by the lab, you begin to get emails or text message updates which continue throughout the entire process. As each piece of information is uncovered, you receive a specialized link to a website where you can view your dog’s results.

The first section of the DNA test results is Health. This section reviews the common conditions that dogs with the same breed mix as yours are prone to. For Callie’s breed mix these were: MDR1 Drug Sensitivity (ivermectin which is part of many heartworm preventatives is one of these types of drugs), 8 different blood diseases, 5 eye diseases, 1 multisymptom, 3 brain and spinal cord diseases, 1 muscular, 1 metabolic, and one gastrointestinal disease. Thankfully Callie was not a carrier for any of these! She was also not a carrier for any of the other 147 genetic diseases that it tested for.

Her results did, however, show that she tested positive for 1 genetic mutation and was classified as “At Risk” for Dilated Cardiomyopathy. This is the most common acquired heart disease in dogs. “At risk” is predictive of her being affected by this condition at some point in her life but is not a diagnosis and does not predict when symptoms may occur or their severity. Learning about this predisposition is very important since early diagnosis and treatment for this disease is key.

Everyone was surprised to learn that her breed makeup is almost as much Chow Chow as it is Border Collie. Her outward appearance resembles a Border Collie much more than any of the other breeds listed.

The next part of the results detailed all of the traits from each of the breeds she is mixed with. As shocked as we initially were seeing 19% Chow Chow, many of the personality traits, especially the part about being wary of strangers, is particularly true for Callie.

We then got to view photos of other dogs that have the same mix match as Callie. These are based on the % of breeds that other tested dogs share with Callie. For example, a dog named Pepito matched 62% with Callie’s breed mix.

The next section of the results was called Haplogroups. This reveals your dog’s ancient heritage. These groups originate from one male or female wolf living tens of thousands of years ago! They are now used to trace your specific dog’s ancestral route all around the globe. There are also Haplotypes which are particular DNA sequences that inherited by the dog's specific mother or father. Many breeds are dominated by only one or a few haplotypes. Callie’s haplotype is B1/13 which comes from Central and South America, South Asia and the South Pacific.

The expanded traits section was the next part of her DNA results. These focus mainly on the physical traits of your dog and their genetic diversity. The result list runs you through the different genes that your dog has for various traits such as coat color, other coat traits, body features, body size, performance. Next, you are able to see your dog’s genetic diversity and if there is any inbreeding within their DNA.

Callie’s DNA for her coat, body features, and body size were a spot on depiction of what she actually looks like. It described her coat color and length, shedding tendencies, and markings perfectly. We were also happy to see that Callie was 0% inbred.

The last section was Callie’s relatives. DNA companies measure this by analyzing how much your dog’s DNA matches other dogs in their database. As DNA is passed through generations it goes through a process called recombination. This process is actually the same for humans and dogs. Before DNA is passed from parent to offspring two chromosomes are shuffled randomly. This explains how humans siblings only share about 50% of their DNA with each other. The same thing happens in dogs, but since the history and breeding practices are different for dogs, there is a higher chance that there is some inbreeding when two dogs mate today.

In Callie’s case, the highest percentage relative rate was a dog named Grace who shares 5.6% of Callie’s DNA. Grace, however, is 50% Border Collie. Grace is classified as “extended family” and is similar to what we would call a second cousin. The really fun part is, if any of Callie’s relatives end up getting tested in the future, we will receive updates notifications alerting us! The more dogs that get tested, the better chances we have to find the relatives of our pups!

Now It's Your Turn

While DNA testing isn't cheap, the wealth of knowledge you will receive from it is worth the price. Just knowing that your dog may be predisposed to a condition or disease can help you with preventative options. We can’t wait to hear about the awesome mixed breeds we have as part of our pack!

The Link smart collar is now available for reservation at linkmypet.com.

Why should human wrists have all the fun? The all-new Link Smart Collar was designed to help...

There's no better exercise in empathy than trying to walk a mile in your dog's shoes. Champ's hierarchy of needs isn't too different from his human's needs. But since...